Hey there peeps!!  I am still alive, in case anyone was wondering.  I have been so lazy with the blog lately!!  I still have homework every night (for only 6 more months....thank you baby Jesus...I will finally be a college grad!!!), I recently got a promotion at work (YAY!!) so my mind has been on overload with all the training and new systems I have to learn, I've been trying to help my hubs recover from his recent shoulder surgery, and blah, blah, blah, blah, blah.  I know, I'm sounding like a broken record.  I know everyone is busy with life, and honestly I don't know how some people do it with kids thrown in the mix.  I can't believe I have kept my dogs alive this long.

Anyway, one of my New Year's resolutions is write at least 1 new blog post a week, so I am trying to get an early start.

Instead of filling you in on my life these past couple of months with words, I decided to do it with pictures.  Enjoy!!   (If you already follow me on Instagram you have already seen most of these photos so I apologize in advance!!)


My Mom celebrated her 50th birthday.  My sister and I had been planning her surprise party for MONTHS, and we even got her best friend (my Godmother) to fly in from CA and spend 4 days with her.  They haven't seen each other in about 10 years.

CHRISTMAS TIME!!!!  I haven't bought 1 thing yet.  I am such a procrastinator.


I know it’s been a hot minute since I’ve blogged, but I’ve just been busy with life.  Work and school seem to be getting the best of me, so when I get home at night I don’t even feel like cooking dinner or taking a shower, much less blogging.  I am so exhausted.  I have started again with the no soda (I was off the wagon for a couple weeks) so I’m back to being in a bitchy mood and popping Ibuprofen every.single.day like it’s my job.  It’s hard enough to keep up on school, the house, the dogs, my husband, my friends, my family…..so my weight loss and blogging has been on the back burner for a while.   I know what you all are thinking…..someone call the wwhhaambulance.

I have mainly just been blog-stalking my favorite bloggers (I’m looking at you Holly, Kayla, and Amber!) to keep up with their lives.  I know.  I’m pathetic.

I don’t want Hubby Jack’s nice work to go to waste, so I will try to get back to blogging on the regular.  I just feel like no one reads my posts (except my hubby) so I don’t really see the point.  But it seems to be therapeutic for me and something fun for me to do, so I am definitely going to try and keep on top of it.

Anyway…back to the post for today…HAPPY ANNIVERSARY TO MY HUBBY!!!

Two years ago today we were married on a perfect fall day.  We got married in his hometown in a small church, and had our reception at a nearby banquet facility.  Everything was fall themed: the colors, the decorations, the food, everything. 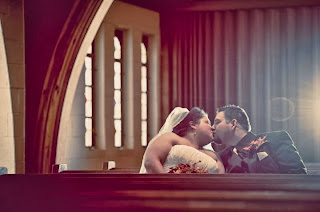 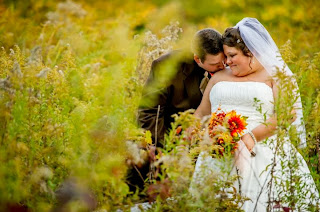 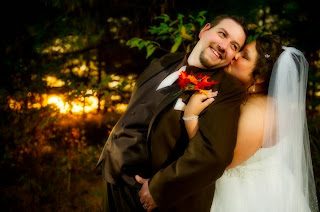 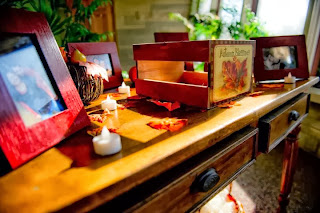 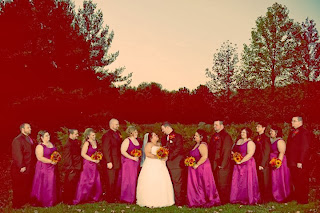 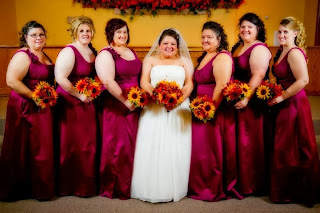 All of our pictures were done by the amazing Nathaniel West of West Photography. 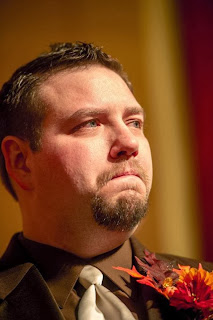 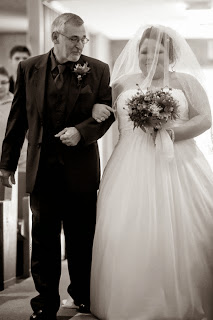 Our cake was a spice cake with cream cheese frosting and it was AMAZING.  So amazing that we didn’t even get a piece—just the small bite we fed each other.  But we did save our top layer and ate it exactly one year later.  And yes, it was still good! 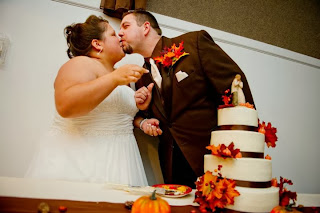 We didn’t take a honeymoon after we were married because we were too broke from the wedding and didn’t really have enough vacation time saved up from work.  But one year later we celebrated by going on a Caribbean cruise to Jamaica, Mexico, and the Cayman Islands.  It was the trip of a lifetime.  I want to go back!!!  It was so nice.  In all of our years together we had never really been on a “real” vacation. 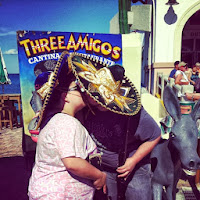 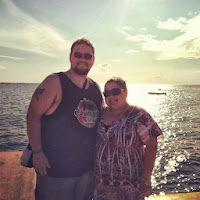 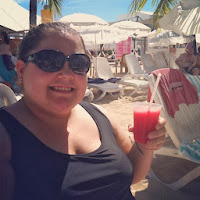 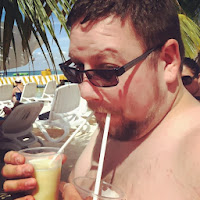 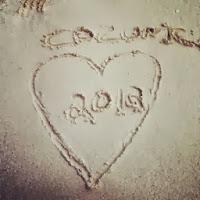 I feel like our marriage has matured so much in just these two short years, and my love for him grows stronger each and every day.  I can’t believe in December it will be 10 years since we met, but it seems like just yesterday!!  I guess time really does fly when you’re having fun!  ;)  I was only 17, still in high school, and he was 20.  We’ve had some rocky times, but we have stood by each other through thick and thin.  On September 24th, 2010, after 8 years of dating, he (finally!!) popped the question, and we were married a year later.  There is a lot more to our love story, so if you guys want, I can do a few posts on that.  It’s pretty interesting to say the least ;)

He is truly my better half, and he is the best husband I could have ever asked for.  Do I want to kill him sometimes?  Yes.  But I try to see all the good and just let the petty stuff roll off my shoulders.  I have learned that in marriage you definitely have to choose your battles.  I know he sometimes wants to kill me too.  I will be the first to admit, I’m not the easiest person to love, but he still does, unconditionally.  It is SO easy to love Justin.  He is so kind and considerate, and he is completely selfless.  He is a friend to everyone and would do anything for anybody.  I truly am the luckiest girl in the world.

More pictures of us through the years.... 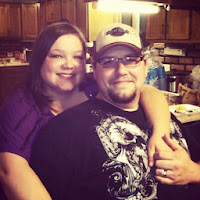 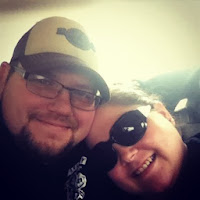 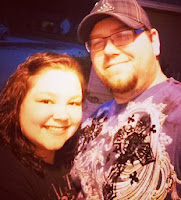 Since this is an anniversary post, I found this marriage survey online so I thought I’d give it a whirl.

Who is your man? He’s that cute blue eyed guy that I married.
Who eats more? He does.
How old is your man? Just turned 30 last month.
Who said “I love you” first? He did.  I said thank you.  Haha!!
Who asked who out first? I asked him out first.
Who sings better? I do.
Who is taller? He is.  By almost a foot.  He’s 6’0” and I’m only 5’2”.
Who is the messiest? I am.
Who is smarter?  I think we are both pretty smart .
Who takes out the trash? Him usually.
Who does the laundry? Both of us.
Who is more stubborn? ME.
Whose parents do you see more? Mine.
Who pays when you go out? He does.
Who sleeps on the right side of the bed? If we’re laying down in it, he does.
Who cooks dinner? I do.
Who drives when you’re together? Him usually.
Who pays the bills? I do. He makes the money and I spend it.  A true marriage.  Haha!
Who proposed? He did.
Who wears the pants in the family? Both of us!!

I love you babe and cheers to many more!!

Last but not least, a picture with the pups :) 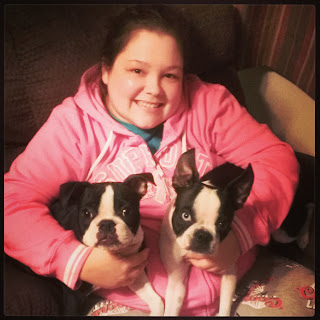 October is my favorite month, most of all because of the fall season, Halloween, pumpkins, hayrides, haunted houses, leaves changing, hoodies, hot cocoa...love every single thing about it! 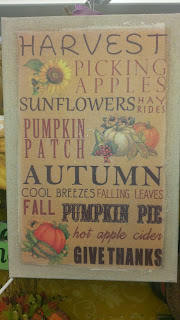 I wish there was somewhere on Earth where I could live Fall all year round.  I still haven’t put up my fall decorations.  I still want to decorate for Halloween too, but all of our Halloween decorations are morbid and scary, so Justin thought we should just have one or the other, not both.  I told him I thought it would be fine to mix and match but he said no.  What are your opinions?

I bought really pretty white and light pink pumpkins at the store last week along with the regular orange ones, and my dogs have already eaten them, stem and all.  They didn’t eat the ENTIRE pumpkin, just took bites out of my favorite one, so it looks like shit now.  I swear they are worse than the squirrels.  But they’re so cute.

Just an FYI, pumpkins DO NOT smell like pumpkin.  I took a big whiff of this one and it smelled like rancid wet dog.  Seriosuly.  Don't say I didn't warn you.
On a different note, the hubs and I started the Dave Ramsey Financial Peace University classes last night.  It was a lot of information to take in, and I know it’s going to be really hard, but we are more than ready to get started!  We make a pretty decent living for being as young as we are and not having children yet, but we spend our money pretty recklessly and then end up living paycheck to paycheck to pay our bills.  We talked a few weeks ago about why we spend so much money on materialistic things, and we think it stems back to when we were growing up.  Neither one of us grew up with a lot of extras.   A luxury for our family was going to McDonald’s once a month.  For as long as I can remember both of my parents always worked 2 jobs just to make ends meet.  Our basic needs were always met, but anything extra took some planning and saving up for.  And as far as his family goes, his Dad was the sole bread winner for their family of 6.  His Mom did some cleaning jobs on the side when they were in school, but it still wasn’t much.

We justify our spending now as: “It’s only money, why not spend it if we have it?”  Because we are not used to having very much of it, so when we get it, we just want to enjoy it and spend it.   Then we have nothing to show for it (money in the bank).  Did you know that the number one reason couples fight is over money??  In the near future we would like to buy a house and start having children, and we want to be more financially stable first.  We have automobile debt, credit card debt, and student loan debt.  It's not a lot, yet we hardly have anything in savings, so if something came up where we needed 5, 10, or even 15 thousand dollars, we would be up shit creek with no paddle.  I would also love to save for our retirement so we’re not working up until the day we croak.

The diet will have to be on hold for a while, because I have a feeling we will be eating a lot of Ramen noodles, hot dogs, spaghetti-o’s, and PB&J sandwiches.  Dave Ramsey teaches discipline, which is something we don’t really have a lot of.  One of Dave's most famous quotes is "We buy things we don't need with money we don't have to impress people we don't like."  This quote is Justin and I all the way. It's like he is speaking directly to us!

Justin is already feeling sick because he won’t get to go to Best Buy every other week to buy a new CD, and I am already sweating over the fact that I won’t be able to buy trashy celebrity magazines every other day.  BUT WE CAN DO IT!!  I HAVE CONFIDENCE IN US!

We know a few people who have already taken the course and it completely changed their life (in a good way!), so we are hoping it does for us too!  If there is a class in your area, I highly recommend looking into it!  I'll update you guys every week on how it's going.  Hopefully in a short amount of time we will have some debt paid off and money in the bank! :)

As always, I will leave you with some adorable pics of the pups.

Xoxo, Katie
Posted by Katie at 9:01 PM No comments: